“African women are not lacking in talent, but in means” 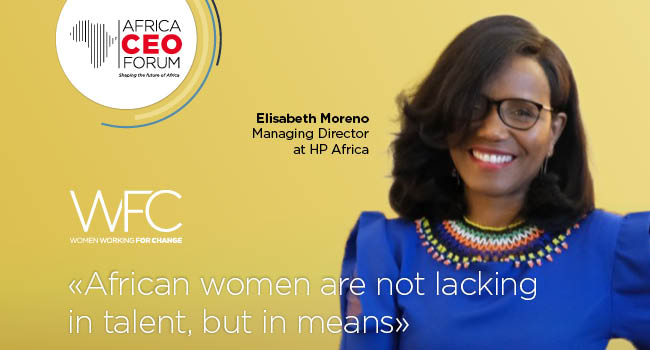 Born in Cape Verde, Elisabeth Moreno, 49, has just been appointed Deputy Minister responsible for Gender Equality, Diversity and Equal Opportunities in the french government formed on July 6 by the Prime Minister Jean Castex. At the same time, she has led since January 2019 American group HP Inc.’s in Africa, the continent’s leading supplier of printers (37% market share) and personal computers (31% market share). A graduate of the ESSEC Business School (France), she previously worked for competitors Dell (2000-2012) and Lenovo (2011-2017), where, in 2017, she became President and General Manager for France. Showing her solidarity and professionalism, since the beginning of the Covid-19 crisis Elisabeth Moreno has chosen to stay close to her teams in Johannesburg (South Africa) rather than return to Paris (France), where some of her family lives. She gives us an in-depth and perceptive interview on the place of women in the African private sector.

Are you happy to be a businesswoman in Africa?

Firstly, I am happy to be an African who has returned to the continent where I was born. And I’m very happy to be a businesswoman in Africa, especially considering the growing role of business in the economic and social development of our respective countries. Part of an entrepreneur’s role is to propose solutions to our society’s problems, and God knows that there are things to be done here, be it in education, health, finance or agriculture.  I am all the more enthusiastic because Africa is the most promising continent in terms of economic and social growth and my chosen field, information and communication technologies (ICT), is well placed to provide concrete solutions to our continent’s troubles, in particular by making entrepreneurship easier.

According to the firm Boston Consulting Group (BCG), if women and men participated equally in the global economy, global GDP could grow by 6%. How do you explain this figure?

Difference is a strength. It is a real asset. It encourages diversity in ways of thinking, creating and innovating – an extraordinary advantage for our businesses, giving the prospect of infinite growth. Diversity, be it gender or cultural, forces us to see the world differently, to adapt our offering, products and services in different ways.

Is there such a thing as “female leadership”?

Leadership does not have a gender. It is a question of quality and skills, acquired or learned. For me, the three greatest qualities of leadership are courage, generosity and resilience. Both men and women can possess them. I often hear it said that men are more strategic and that women are more operational. But who would say that Hafsat Abiola (a Nigerian human rights activist), Leymah Gbowee (an African peace activist from Libya) or Angélique Kidjo (a Beninese singer) aren’t strategic? As a woman leader and manager for more than twenty years in very masculine fields, I’ve had the opportunity to work with a lot of men and women leaders who have as many so-called “feminine” qualities as “masculine” ones.

Have you ever felt that you encounter specific obstacles in your career because of your gender?

Yes. You know, stereotypes are hard to overcome. If I were to ask you right now to close your eyes and imagine the managing director of HP Africa, you probably wouldn’t imagine a black woman. Twenty years ago, when I joined France Telecom (now Orange), the Managing Director took me around the office to introduce me and some employees automatically assumed I was the new secretary, when I was actually the new head of corporate customer service. We are confined to more feminine roles, such as nursing, teaching, being a secretary, HR manager or housewife. This is all noble work, but we can be something else. Even today, when I introduce myself, people cannot help but be surprised.

How did you learn to be assertive?

I’m the child of Cape Verdean immigrants and I grew up in France. I encountered more obstacles than my share, and quickly understood that this is just how life is. What doesn’t kill you makes you stronger. From every challenge, every insult, every humiliation, I have drawn the strength to become more resilient. I cried, I wiped away my tears, and was left more determined to succeed. That’s what I did until I realised that I had the potential to take on the world.

Do you think you are a role model for other women? How do you feel about the concept of sisterhood?

Madeleine Albright (U.S. Secretary of State from 1997 and 2001) said that there was a special place in hell for women who don’t help other women. Yes, it’s a bit of a caricature, but I believe that we need to think like that. If we really want to remedy the injustices, violence, and social and economic inequalities that women suffer, it is essential that we help each other. It is together that we will make progress. There are very few women in the tech industry and even fewer black women. By the force of circumstances, I have become a role model. I didn’t seek it out because it’s a big responsibility. Those who have heard that some jobs are not for them because they don’t have the right skin colour, the right name or the right nationality, should know that if I’ve done it, with hard work and resilience, they can do it too. In that sense, being a role model is a privilege.

Many women say they feel a lack of self-confidence compared to men. How can this be rectified?

It is, above all, a question of education, tradition, and environment. We become what we believe we are. If we are told for years that we are poor, fragile little people who need the constant support of men to survive, we end up believing it. I know women whose parents have constantly built up their confidence, telling them that they are capable of doing anything, of becoming anything. These women, in general, do not lack self-confidence. For women who are already adults, I would recommend unravelling what they have been taught. Let them see that talent, skill and ability are not a matter of gender, but of will. That everything can be learned if you really want it, and that there will always be someone caring to help and support you.

Is there a gender strategy in your company?

We make sure that our recruitment includes as many women as men, and then train them to become the leaders of tomorrow. As a result, today we have one of the most diverse boards of directors in our industry.

Professionally, is there someone who inspires you?

My mother. She couldn’t read or write, was a homemaker for most of her life, took over ten years to pass her driver’s license, having to memorise road signs. Then, at the age of 45, she passed the exam to become a civil servant and today she is living her dream of running her own hotel-restaurant in Cape Verde. Alternatively, since the Covid-19 crisis began, I have had the opportunity to discover the great work of the Bill & Melinda Gates Foundation. They invest a lot in Africa, in hospitals, education… These are people who have already achieved everything, but who continue to do more and more to help the most disadvantaged. I think that’s remarkable.

Is there a company operating in Africa that you particularly admire, and why?

Trace TV (a French television channel dedicated to urban culture). It’s an entertainment channel created by Olivier Laouchez which is the first global ecosystem that leverages afro-urban entertainment for a new generation. Olivier Laouchez has changed his business model – which was working very well – to a new one, in favour of the common good. As a leader, that takes a lot of courage. Everybody talks about education, but few people actually get involved. He did. The current educational model does not excite young people, even though 65% of the African population is under 25 years old. We absolutely have to find a way to make young Africans want to learn, and Trace TV is on that path.

Are there any specific challenges faced by professional women in Africa?

The African continent has the most female entrepreneurs. There are a lot of working women, but they are not recognised for their contribution. The challenges they encounter are the same everywhere: not having adequate access to financing, not appearing credible in business, and not having access to management roles.

What is the next African country you would like to visit and why?

There are so many… but I would like to go to Zimbabwe. Apparently it’s beautiful and the people are incredibly kind.

What do you do to unwind after a day’s work?

I often finish very late. I like to watch a movie after a nice bath.

Do you take part in any associations or women’s networks, or do you mentor?

I am very active in Cape Verdean organisations, where I mentor women and men of all ages. I am also a member of PABWA, a group created after the adoption of the Continental Free Trade Agreement (FTAA) and which campaigns for a greater prominence for women in the agreement. I have also just joined the Women in Tech organisation in South Africa. Finally, I am also working with the UN to develop women’s leadership through technologic tools.

In your opinion, can forums such as the Women in Business Meeting make a difference for African businesswomen?

Yes, of course. African women do not lack talents, but means. They are undervalued, but resourceful. Setting up platforms to help them is therefore essential. Even more so given that women are generally very busy and spend little time on their own development. This type of forum gives them that time. And as the saying goes, “To educate a girl is to educate a village”.

What kind of girl were you at twenty years old?

A great idealist, I wanted to save the world… I studied law to become an activist but, in the end, life decided otherwise.

Today, are you where you’ve always wanted to be?

No. I’m only 49 years old, I still have a lot to do! It would be sad to think otherwise… I’ve been an entrepreneur, a judge, I’ve worked on four continents within multinational companies. I know there’s still a lot of things out there to do, and I want to continue to explore every opportunity. One of my aims, for example, is to focus on working with and for young people in Africa, particularly through technology.