‘Covid-19 crisis: a mother of innovation?’ 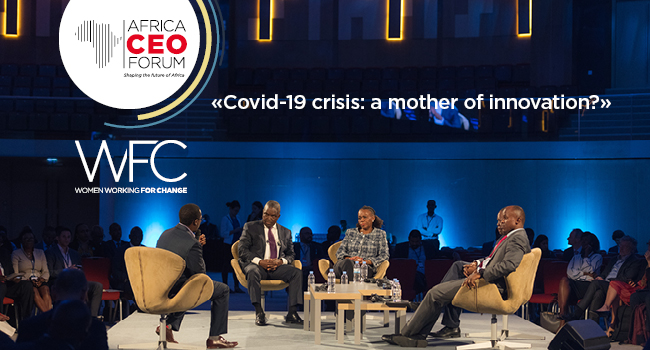 Unprecedented and felt around the world, the Covid-19 crisis is impacting every segment of Africa’s economy. However, its effects are unevenly distributed from one sector to another. During the WFC Summit, four high-level panellists shared their thoughts on the winners and the losers of the crisis, as well as what the future has in store for the continent.

“My initial observation is that the crisis has undeniably hit the automotive sector and the oil and gas industry the hardest and most directly in terms of business activity and jobs, whereas it has boosted the telecommunications and health sectors,” said Enase Okonedo, Dean of Lagos Business School and moderator of the roundtable, underscoring a reality that applies to every continent but which very swiftly plunged Africa’s most vulnerable segments of the economy into crisis mode: “The informal economy, a crucial segment for the continent’s urban areas, and the female workforce paid a particularly high price in the wake of Covid-19. Job losses impacted between 10% and 20% of workers, depending on the country.”

Sérgio Pimenta, Vice President for the Middle East and Africa at the International Finance Corporation (IFC), added: “Other immediate losers include the trade and aviation sectors, with the latter facing a contraction of more than 50%. More broadly speaking, the tourism industry has lost $50bn in revenue and eliminated at least two million jobs in Africa.”

For Pimenta, “the most fundamental aspect is that every sector has undergone radical change. The crisis response is, so to speak, paving the way for the post-crisis order in terms of how value chains are structured and the jobs of the future. Because women were disproportionately affected, a policy response that addresses this reality is urgently needed”.

Financial services is certainly caught up in the crisis. “This awful period has been quite the learning experience. The financial services sector was significantly impacted but it was also able to adapt very quickly. The catastrophe we feared never materialised,” said Laureen Kouassi-Olsson, Non-executive Director at  Orange Abidjan Participations and Fidelity Bank Ghana. According to this financial services professional, two factors spared the sector the worst: the acceleration of digitalisation and government aid. “The authorities, regulators and central banks provided a massive amount of assistance to the banking sector, for instance. Governments leveraged the banking and financial system to prop up other sectors of the economy as well as SMEs, in an effort to reduce the macroeconomic impact and prepare for the economic recovery,” she said. On the digitalisation front, “One positive aspect of the crisis is definitely the digital financial services revolution. It’s providing an opening for the continent to roll out these services much more quickly and widely. Telco operators have already embraced this revolution by picking up the pace of their deployment in this area.”

On a very different note – this time about the food industry – Rim Bennani, a member of the Chairman’s Office of the phosphate producer OCP Group, had the following to say: “Covid-19 caused disruptions downstream due to the restrictions affecting restaurants and other businesses. But the crisis has also significantly quickened the pace of the sector’s digital transformation, especially upstream. For example, we’ve seen a boom in the use of drones by farmers.” Bennani also reiterated that many African governments were keen to lend a big helping hand to domestic farmers during this period of upheaval, in an effort to ensure supply chain efficiency at a time when regular import flows were disrupted.

“In the end,” said Bennani, “agriculture has pretty much come out a winner in the wake of the crisis. Governments have recognised the need to improve the quality and upgrade the size of their domestic supply chains, so they understand the crucial impact this activity has. The downstream end of the chain is also learning to adapt and to embrace digitalisation, with the food industry witnessing strong growth in e-commerce solutions and innovative marketplaces.”

The present crisis is also bringing about structural changes in how businesses and governments are run. This is a point Ngozi Edozien, Managing Director and Founder of InVivo Partners as well as Non-executive Director of Stanbic IBTC  and Diageo Nigeria, stressed: “What I’m noticing is that corporate governance practices are rapidly changing. It’s extraordinary! Everything has accelerated. Boards of directors are meeting much more often. Companies are constantly monitoring their business and setting up risk and security committees. I’m seeing managers communicate much more effectively with their teams.” For Edozien, now that remote working has become the norm in the service sector, it has become especially challenging to keep teams engaged, stabilise business activity and, more than anything else, prepare for future growth. In her view, “adversity is the mother of innovation”.

“The quality of corporate governance is a determining factor in the success of the economic rebound,” Kouassi-Olsson said. “What will separate the winners from the losers is the ability to change rapidly.”

Pimenta agreed, adding that every business needs to undergo transformation. “It isn’t easy. And governments’ role is to follow through on their own transformation and to expand the role of the private sector, as the latter’s influence is too limited in Africa to improve value chains.” An encouraging factor, he said, is that prior to the crisis Africa was the world’s leader in spearheading business-friendly reforms. “This momentum needs to continue,” he added. For its part, IFC significantly increased the size of its team in Africa during the pandemic, adding more than 100 new employees.

This recruitment drive is indicative of high public- and private-sector demand for financing and liquidity. “The crisis has put us in a very bad position. However, I’ve noticed that some countries, such as Ghana and Nigeria, are taking into account the lessons learnt in the past. They were able to manage their liquidity crunch with the help of international institutions and their banking systems. That said, for investors, the crisis raises the question of currency risk and monetary stability in Africa,” Kouassi-Olsson said.

Effectively, for Edozien, this external shock brings up an important issue: the continent needs to be able to address its long-term internal financing needs. “Africa needs to end its reliance on foreign currency-denominated funding, which can backfire so quickly. Banks and businesses need to find sources of local funding to finance the local economy.” She added: “The other key takeaway for the continent is that we must reduce our exposure to imported products and develop local production in a big way.” At the height of the crisis, Africa was forced to do just that to get the medical supplies it needed. “But we have to ramp-up this change in every area of the economy,” Edozien said.