‘Covid crisis: supporting women should be a priority’ 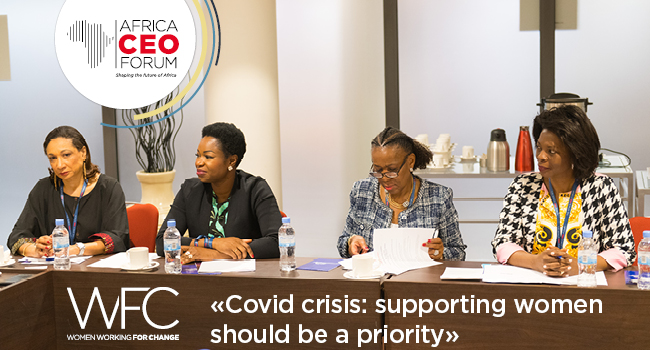 Africa’s ambition of achieving greater gender equality in the workplace has been derailed by the Covid crisis. Several high-level panellists offered their ideas on how to get things back on track.

While Africa is far from being the hardest-hit continent in the wake of the pandemic, its society has not been completely spared by the effects of Covid-19. According to various studies, the situation has exacerbated gender inequalities on the continent and is expected to attract greater attention to such issues. Panellists came to a similar conclusion during the WFC Summit roundtable “Covid crisis: a setback for gender equality”, moderated by the South African journalist Nozipho Tshabalala.

Sandra Sancier-Sultan, Senior Partner at McKinsey, shared an enlightening report on the current shifts Africa is experiencing on the gender equality front. “Given the disruptions Covid-19 has caused in the education system, we’re seeing a situation where the workload of African women has increased dramatically, even though it was already higher than the global average before the crisis hit.” Indeed, women in Africa spend 2.6 times more of their day on domestic work than men. What’s more, the disproportionate impact on women manifests itself in the types of jobs eliminated. “Women are overrepresented in sectors that have been greatly affected by the crisis, such as the hospitality and the retail industry,” she added. On the continent, bias is an aggravating factor: more than half of people surveyed in Africa think it is normal for men’s right to work to take precedence over women’s during an economic crisis.

Governments “should implement structural support measures to compensate women for their unpaid domestic labour, combat cultural bias and promote women’s job training, particularly in the sectors of the future, like digital technology. If we make these things happen, we estimate that Africa could increase its GDP by about 10%. This is a major potential growth driver during the crisis,” Sancier-Sultan said, reiterating that the continent could be a trailblazer in this field. In addition, according to McKinsey – and contrary to popular belief – Africa is the global leader in gender diversity on boards of directors of major companies, with women occupying 25% of board seats, compared to a global average barely approaching 11%.

Frannie Léautier, CEO of the pan-African SouthBridge Investment firm, is pleased with this news but moderated her enthusiasm: “This is a good sign for young African women holding leadership positions, but that shouldn’t obscure the vast amount of work that’s left to do to achieve gender equality, especially for lower income groups. The crisis has complicated the situation for low-income women.” In this climate, she added, “We need to combat gender bias through education, job training and life-long skills building. During lockdowns, remote learning and digital technology have clearly emerged as major transformative tools”.

For Cecilia Akintomide, former Vice President and Secretary General of the AfBD, who now serves as Independent Non-executive Director for the Nigerian banking group FBN Holdings, a key part of the problem lies with the lack of long-term, expansive policy choices made by governments, as inequalities grow over time. “This is what we find unfortunate in Nigeria concerning retirement pensions. Women’s pensions are three times lower than men’s on average, owing to the fact that women do a lot of unpaid work and put their careers on pause to have children. This is a political issue and governments need to come up with an appropriate response, but they don’t often do that,” she said, adding, “the example of women’s balanced representation on boards of directors in Africa shows that we need specific policies addressing gender equality. After all, these encouraging numbers are the work of the regulators overseeing major companies, including in finance.” Advocating a proactive approach, she had one final message to get across: “If we don’t implement the right kind of policies, Africa will lose out on opportunities because taking gender equality into account isn’t just about equality itself, it’s also about additional growth opportunities for our economies.”

According to Mehdi Tazi, Vice President of the Moroccan employers’ federation, CGEM, and CEO of Beassur Marsh, the task may seem daunting in Africa, but in reality the situation is not so different from what the rest of the world is experiencing. “There are often no easy solutions to these problems,” he said. “They involve, even for women, a change in mindset and cultural beliefs, and that takes time. For instance, women tend to feel they are personally responsible for the care of their children and elderly family members. In this regard, we’ve had some success with affirmative action policies. In Morocco, one such positive outcome is the increased number of women serving in parliament. But this type of approach won’t work without broader societal change, especially within lower income groups where there’s still a huge gender gap in the division of domestic work. Moroccan women do six times the amount of household chores men do, for example.” Tazi added that legislators should prioritise finding a way to compensate women for their unpaid work, particularly given the gravity of the ongoing crisis.

According to Léautier, there are two ways to alleviate women’s burden during the pandemic. The first solution involves fundamentally changing the sectors most impacted by the recession and in which women are overrepresented, such as the hospitality industry. “In many countries on the continent, we’re already witnessing a rapid change in this industry’s business model, as they are shifting their focus over to domestic customers and stepping up their purchases of local food products, while restaurant delivery services and other forms of e-commerce activity are booming. The way the private sector has adapted, often taking women’s entrepreneurship into consideration, is encouraging, but the public sector also needs to take action, and that’s key to the second set of solutions,” she said. In the post-Covid order, it will be critical to ensure that women are trained in the fields of the future so that they can create their own SMEs. “This kind of initiative requires a massive investment in digital literacy. We need to give women the tools they need to accelerate the growth of their businesses. All too often owners struggle to get their business off the ground because they don’t have enough training,” Léautier said.

In this time of crisis, gender dynamics should influence public policy choices and how the private sector is run. Layoffs, for instance, are hitting the youngest generations much harder, and as women make up a significant portion of this segment of the population, they are bearing the brunt of the impact. “We shouldn’t be afraid to put this kind of observation out there,” Akintomide said.