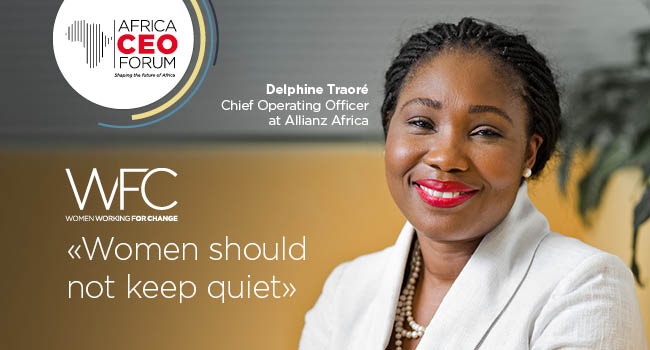 Born in 1975 in Burkina Faso, Delphine Traoré, who has served as COO at Allianz Africa since 2017, works in Abidjan at the West African headquarters of one of Europe’s leading insurance companies on the continent. Allianz Africa reported revenue of €588m in 2018 and had some 1,500 employees there. Ms Traoré is in her element at the company. With almost 15 years of experience under her belt at the German insurer, she knows Côte d’Ivoire like the back of her hand. After all, she did grow up and attend some of her schooling there. After rounding out her studies in the United States at the University of Pittsburgh and Boston University and working in North America for close to 15 years, she decided to return to her home continent of Africa in 2012, where she is one of only a few women in the insurance sector to hold a position at that level of responsibility. Her success is undeniable: today, Delphine Traoré is a truly versatile businesswoman who serves on some ten different boards of directors (African Risk Capacity, Société Générale Côte d’Ivoire, etc.) and is viewed as a great role model by her peers. Outspoken, dynamic and decidedly optimistic, she agreed to share her little everyday secrets to being a successful businesswoman.

Absolutely. In Africa, women are the pillars of the family. In many ways, they are the ones who hold the power at home. And they are really listened to. Today, being a businesswoman in Africa means transposing all of these characteristics to the workplace and it’s a rather intriguing challenge. Working here on my home continent is really important to me. I feel invested in supporting fellow women and giving them the strength to see their ambitions all the way through.

According to a recent analysis by Boston Consulting Group, if women and men participated equally as entrepreneurs, global GDP could rise by up to 6%. What do you think of that?

Women aren’t able to access the labour market as easily as men, particularly in Africa. And it seems logical to me that that would impact GDP. Donald Kaberuka (former president of the African Development Bank) summed it up well: “When you go into the boxing ring with one arm instead of two, you don’t have all your strength”.

In your opinion, does women’s leadership exist?

A leader is a leader, no matter the person’s gender. A leader has to know how to motivate teams and make them want to follow in the leader’s footsteps. Over the course of my career, I’ve noticed that women show more empathy to their colleagues than men do. They don’t just focus on the problem they’re faced with – they also focus on the person in front of them. To successfully motivate someone, the best way is to take into account his/her experience, personal situation and plans.

No. When you’re good at what you do, you gain a certain amount of respect from your colleagues and bosses which makes your gender secondary. However, as a mother, yes, that’s the case. For example, I’ve already turned down a job so that I could stay close to my kids. I even took a sabbatical year when I had my second child.

Do you think it’s more difficult to be a woman in the workforce in Africa than elsewhere in the world?

In Africa, a lot of men still haven’t assimilated the principle of gender equality. You can tell that by the fact that, particularly during negotiations, men think they inherently have the upper hand. There’s still a lot of work to be done before men allow women to take their rightful place.

Do you see yourself as a role model for other women? What does female solidarity mean to you?

Let’s say that I do the best I can. I try to be open and accessible to other women at my job. I don’t want to seem pretentious by acting like I’m a “role model”, but like everybody, I have certain strengths that others don’t. It’s important to share your experiences and successes, which is why I decided to lead a special project – the Allianz Africa for Women Conference – which offers talented women an opportunity to network and support one another (via collaboration, training, boosting of self-confidence, career development, etc.). Each time I go on business trips, I meet one or two young women who may be a good fit for the programme. The long-term goal is for them to be promoted to leadership roles at the company. The initiative’s first tangible achievement was Adja Samb’s promotion to CEO of Allianz Senegal in January 2019.

A lot of women are less confident than men. How do we fix that?

It’s a deep and complex question. Personally, I never had trouble with this because I was raised in an environment where I was treated the same as my brothers and sisters. From the moment I’m as effective as a man, there’s no reason for me to be intimidated by anyone. Obviously, it’s easier said than done but self-confidence is the result of a process. For example, I often tell women that they should force themselves to ask questions during meetings, even if that means preparing them in advance. Building self-confidence involves taking your seat at the table. And to do that, you have to start by not keeping quiet when you have the chance to speak up.

Yes, and it’s pretty effective. An increasing number of women are obtaining positions in upper management and several appointments took place recently within the board of directors of Allianz Partners . Currently, I’m the only woman serving on Allianz Africa’s board of directors, but I’m always looking out for potential candidates who could join the board or even eventually replace me.

Is there a woman who has inspired you in your work life?

Ngozi Okonjo-Iweala, without hesitation! She was Nigeria’s finance minister and minister of foreign affairs and then became managing director of the World Bank. Currently, I serve on a board of directors with her. She has been an inspiration for a long time now, but ever since I’ve had the opportunity to work with her, she impresses me even more. She’s not afraid to stand up to men, she is always loyal to her convictions and, at the same time, she knows when to back off. She perfectly embodies the African woman and Africa as a whole. I want to be like her when I grow up! (she laughs)

Do you have a favourite male role model?

My dad. He started out with very little and never lost his integrity over the course of his career. He was an agricultural engineer at the Food and Agriculture Organization of the United Nations and always worked very hard. Whenever I find myself in a difficult situation, I think about what he had to go through and I tell myself “I too can get through this”. When I think of him, it’s extremely motivating because I want to make him proud.

Outside the workplace, is there an African personality who inspires you in particular?

Chimamanda Ngozie. Another Nigerian! I really love the way she writes. We should follow her example. As for a man, I’d say Tidjane Thiam, the chief executive officer of Credit Suisse. He’s one of just a few Africans running a major international corporation. It’s so rare and his journey must have been rife with difficulties.

Is there a certain African company you admire?

Allianz! (Laughs) In South Africa, companies have a bright future. They are one of the continent’s few elite global companies. For example, Discovery Limited, a South African pioneer in shared value insurance, has met a lot of success all over the world.

Which book/movie/TV series/CD has impacted you the most and why?

Nelson Mandela’s Long Walk to Freedom. The book gives you self-confidence and is a source of hope. It reminds me that anything is possible, but also that a lot of people suffered so that we could be where we are today.

I mentor two very motivated women. A lot of other women have asked me to mentor them, but unfortunately, I don’t have enough time for everyone. As part of my job, I’m President of the African Insurance Organisation (AIO) and before that I was President of the Insurance Institute of South Africa. As for women’s networks, I haven’t found one that is a perfect fit yet.

In your opinion, can forums such as the Women in Business Meeting further the cause of African businesswomen?

Yes, but two key things are needed for them to truly work. Firstly, they need to offer networking opportunities. I myself have met and been inspired by so many people during forums, particularly at the Heroines Forum. Secondly, the discussions and workshops need to be in depth for tangible progress to be made and offer tools that can be easily applied in the workplace.

What did you want to do with your life when you were 20 years old?

There was just one thing I was sure of, and that was that I wanted to spend my life in Africa. Other than that, I wanted to do everything all at the same time: be an interpreter so I could travel, be an accountant because I loved numbers and be like my dad, an international civil servant. Very quickly, I realised I could do everything I wanted, but not at the same time, and that meant that I had to set some priorities. Understanding that was very important for the rest of my career.

Yes, for now. Allianz is undergoing a major transformation in Africa, especially in terms of digitalisation. When all of this work is completed, I’ll probably move on to something else. I like a change of scenery every five years. If after five years you can’t find your replacement, then you probably aren’t a good leader.

What was the biggest challenge you took up during your career?

Definitely creating Allianz South Africa in 2012. That was my first time working in Africa and on top of that I wasn’t familiar with the country at all. At the time, I was one of the only black women CEOs of a financial services company. In the end, I was successful in this challenge because I managed to surround myself with the right people.

I sleep! (she laughs) I spend a lot of time with my kids. I try to keep my phone at a distance, even though I get stressed when I disconnect.

Madagascar. I’d like to go there as a tourist but also for work (Allianz has a subsidiary there). It’s one of the few African countries I haven’t visited yet and it’s my dream destination.