Financial inclusion remains an underdeveloped opportunity for the world economy 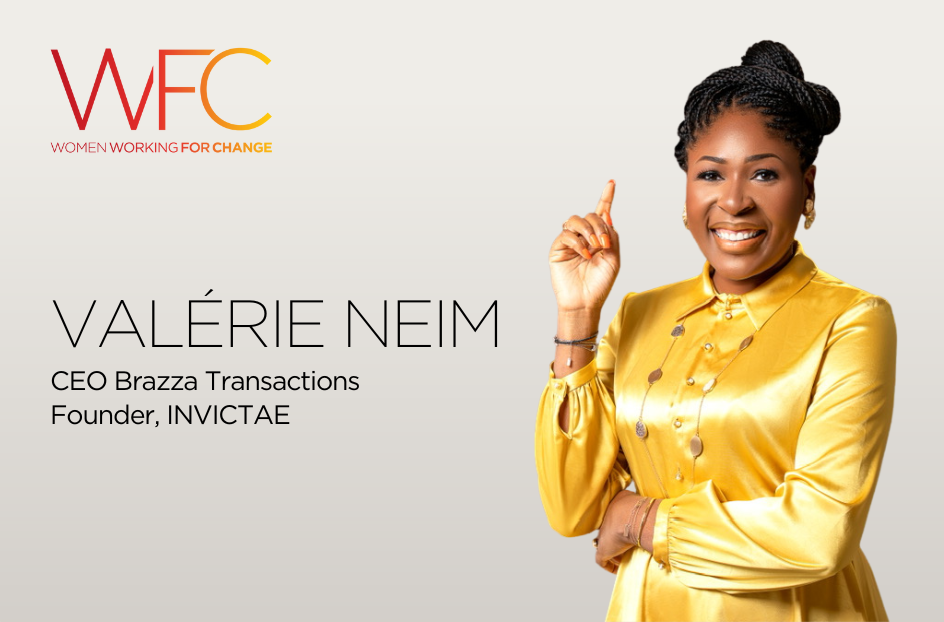 EN: Founder of Brazza Transactions in Douala and CEO since 2019, Cameroonian leader Valérie Neim is an influential figure committed to female leadership.

After her stunning academic achievements, including a master’s degree in entrepreneurship at Oxford, her professional career in Africa began with a chance encounter while on vacation in Cameroon. This meeting would change her life. Within a month’s time, she left England for the UBA bank in Gabon where she became the manager.

Faced with hostile remarks and behaviour, Valérie Neim asserted herself in her role as well as in her results. Driven by her convictions, she launched Invictae in January 2021, a club of influential African women in favour of overcoming gender inequalities.

Q: Can you tell us about your story? And how did you thrive in a male-dominated workplace?

My name is Valérie Neim. I was born and raised in Cameroon, and I left Africa to pursue my tertiary education. While I was doing my MBA in Oxford, I knew I had a responsibility to support the development of my continent.

During my holidays in Cameroon, I had the opportunity to meet a woman leader from Côte d’Ivoire. She invited me to an informal meeting with Jean-Luc Konan, who is an African banker and founder of the Cofina Group. Following our discussion, he immediately offered me a position as the Head of Prestige Banking at UBA Gabon. After having spent several years working for TNT Logistics, Fujitsu-Siemens, and Santander Bank, I left the UK definitively within a month.

When I started my new position, I was taken aback when people started sending me letters saying, “We don’t need a woman who’s not married and without kids to come and tell us what to do”. The more they did that, the more I was willing to show them that I deserved the position. Based on my stellar performances, Tony Elumelu, who was then the General Manager of UBA, invited me to work at UBA Nigeria. During that period, I also got a call from my father who was unwell. He needed me to lead our family business. I submitted my resignation four years down the line and headed my father’s company, Credit Coopératif Participatif du Cameroon (CCPC) as the Managing Director for almost 10 years.

Within that timeframe, I transformed the company’s strategy. I expanded the company from three to 11 branches, and our team from 30 to 200 people. While recruiting, my colleagues would ask me not to hire women. When I demanded why, they said, “You don’t know local women and local mentalities. They will be pregnant, absent when on their period, sick, and come late because of childcare”. My response was clear, “We are going to change the strategy and hire 99% women in this company. I will prove that women can do what you do and do even better, whether they are pregnant, mothers, or on their period. It is a matter of results. Let’s check KPIs and leave out our emotions”.

Q: Banking is a male-dominated industry. How have you dealt with this atmosphere as a woman?

After I left the banking industry, I realised that one of the banking products which represented more than 30% of the margin was ethics in foreign currency. I therefore decided to pursue my own licence and create a Bureau de change (foreign exchange company), Brazza Transactions, primarily as a High-Net-Worth Individuals (HNI) advisor. We are currently the only female-led company to advise HNIs and the only Bureau de change licensed by a woman in Cameroon. Why? Because I have never been afraid. Too many women are afraid to venture into male-dominated sectors. They close the door to opportunities by leaning into traditional gender roles or women-led industries from an early age. But there is no such thing as a job for men and a job for women. It is time for all women and men to step into that truth.

Q: How can we make gender diversity an explicit business priority, and not just a check-the-box training session? Can you give any examples from within your organisation?

Financial inclusion remains an underdeveloped opportunity for the world economy. Yet we can only improve upon this by encouraging greater gender diversity.

But how exactly can we make gender diversity a business priority? I recently launched a platform in Geneva called Invictae. Invictae means invictus, which means “never defeated”. The objective is to identify outstanding women leaders and promote their stories. It is only when their stories are told that people can invite them on the global stage and work with them.

We also need to set KPIs. In Cameroon, only 3% of homeowners are women and 1.6% have a land title. Yet land titles remain the number one guarantee to access loans. This KPI demonstrates the need for law reforms. Corporate social responsibility should also be at the core of business strategies in companies and multinationals, with a focus on gender quotas as well as diverse boards and executive bodies. Here, KPIs are also useful to facilitate fair promotion and recruitment processes between men and women.

Africa has the youngest population on earth today. The lack of traditional banking infrastructure has also made it the fastest-growing digitalised market in the world. Bearing those factors in mind, Africa has one of the strongest potentials to grow its digital financial market.

We also have most of the natural resources the world needs. But we must learn to protect them against the impact of climate change. Just as important, we must leverage these resources to attract foreign direct investment instead of receiving aid from outside the continent.

Finally, I believe that Africa is more aware than ever before. Recently, I saw on the news that the cryptocurrency company Yellow Card, founded in 2016, is already in 21 African countries. It recently raised $45 million. This is unheard of for a cryptocurrency business. It is a sign that African finance will change for the better on the continent as we are taking the lead in terms of cryptocurrency technologies.

Q: How do we improve financial inclusion and promote the emergence of a truly pan-African financial services industry?

Africa should learn from the experience of the European Economic Area (EEA). By creating a continental economic area in Africa, our companies could access a market of 1.3 billion people. It is therefore paramount that we create stronger regional and continental regulations, taxes, incentives and laws capable of transforming this theory into a reality.

If investors are not confident in political systems in Africa, we will continue to struggle in attracting foreign investment. Whereas if investors see Africa as structured regions or a continent, we will have more of this type of investment.

Q: What can venture capitalists do better to address the gender funding gap in Cameroon and continentally?

Cameroon is a very fertile land and its agricultural sectors is dominated by women. I believe that agriculture should be our number one priority and handled separately by the government to attract more investment and fuel the economy.

How can they do that? By creating specific products adapted to agriculture in Cameroon and by lowering the rates of access to finance for women. Today, the rate of access to finance is between 10% and 20%. For a key sector like agriculture, it should not be more than 4% or 5%. The terms of financing are also too short for women – six months to one year.

There is also a need to address unconscious biases and regulation among the banking services. For instance, in most of African countries, women need to get the approval of their husband to get a significant loan. It means that if the husband is not supportive of their endeavours, women will never grow.

To drive venture capitalism in African countries, we need a combination of strategic information, sensitization, laws, quotas and a carte tailor products for women.

Q: What type of leader are you?

People refer to me as Margaret Thatcher or the Iron Lady. I make sure that there is a paradigm shift in my teams in terms of their mindset. I want them to aim for excellence. My mantra is “the best or nothing”. If you can’t have the best, then there is no point doing it.

I am a very optimistic leader who sees the glass half-full instead of half-empty. I am also a very focused and demanding leader. Not everyone can work with me. Nonetheless, empathetic leadership is very important to me. In Africa, 43% of violence takes place in marriages. 14% of women – if not more – are also sexually abused once in their lifetime. It is therefore my duty to add a lot of empathy to my work since violent experiences could be barriers to their potential.

Q: Do you play a role of sponsor to young women?

Sponsorship plays a very big role in my life. I am the patron for many platforms (Women in Finance, Female quotient, 100 women in Cameroon, The Okwelians, Juries for TotalEnergies, Women in action, Orange women for change ect.) and I always say yes when I am invited to women’s leadership and empowerment initiatives. As a sponsor, I believe that by listening to women’s career needs and challenges you can help them go beyond their potential. This is the reason why I launched the Invictae platform, to identify women across the continent and connect them to investors. I call that sponsorship because you are connecting someone to their needs without them knowing they had that need. That is the role I play for women.

Q: And finally, do you have any tips to share with women working in very male-dominated environments?

I always say that the sky is the beginning, not even the limit. The sky is your beginning.
Don’t be scared. Dream big and own your dream. If you are doing it, make sure you are the best in whatever you do. I take the example of Massogbè Touré Diabaté from Côte d’Ivoire. She worked hard to become number one in cashews in Côte d’Ivoire, and she is now a leading producer in Africa and the world. Another example is Daphne Mashile-Nkosi who is number one in manganese. It was not easy, but she believed in herself and achieved her goals.