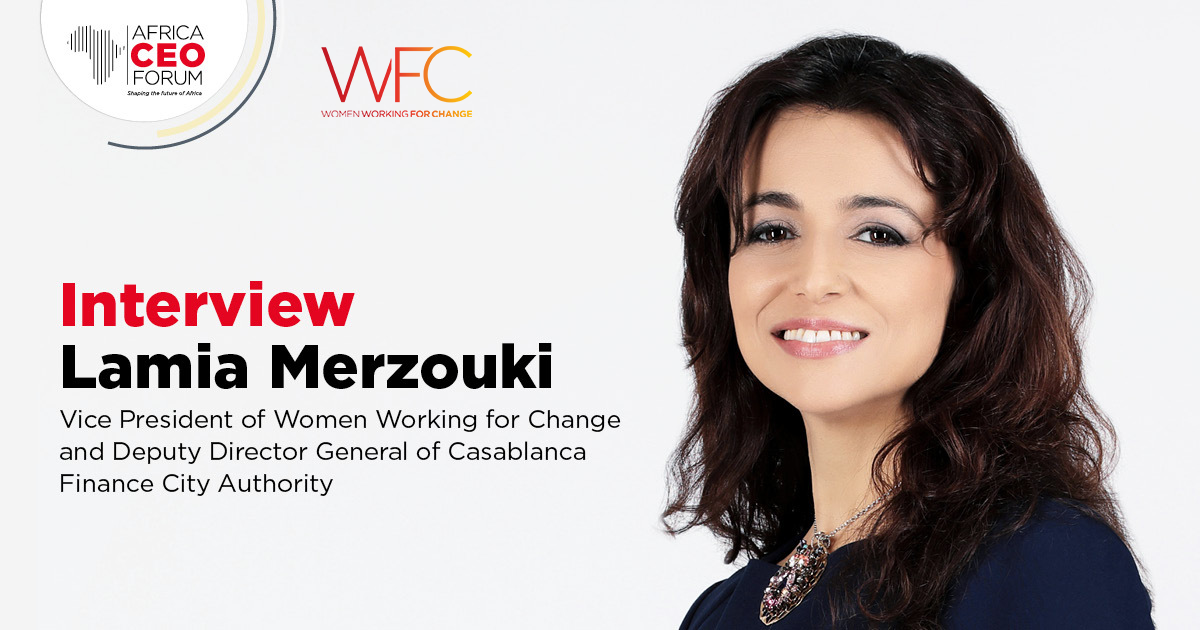 Lamia Merzouki never stops. A committed activist, this high achiever from Morocco has accumulated a string of top posts while never losing her open, optimistic smile. As Deputy General Manager of Casablanca Finance City since 2010, she has become synonymous with at least two causes: gender inclusionand sustainable development.

Vice Chairperson of Women Working for Change (WFC), a pan-African network for female business leaders, she has also been the AFRICA CEO FORUM’s ambassador to Morocco for the last three years and has recently founded and now runs We4She, a non-profit organisation aimed at greater professional inclusion of Moroccan women. Driven by her boundless vitality, she has been elected Co-chairperson of the International Network of Financial Centres for Sustainability (FC4S). Having graduated from Harvard and ESSEC, the renowned French business school, she began her career at Arthur Andersen in Paris before joining the Moroccan Ministry of Agriculture to work on the Green Morocco Plan and the development strategy of the Souss Massa Draa Region.

It was an obvious choice and a pleasure to talk to Lamia Merzouki for the fist in our series of interviews with executive business women.

Africa CEO Forum: Lamia Merzouki, what is the ultimate aim behind your wholehearted commitment to the greater representation of women in Africa’s private sector?

Lamia Merzouki: I am working towards gender inclusion in the boardroom and at every level of the world of business. Further to the 2011 Copé-Zimmermann law in France, which requires 40% of company board members to be women, Morocco has followed suit by adopting gender diversity measures for corporate governance in its July 2021 amendment to the joint stock companies law. The measures target a 30% minimum quota of female board members by January 2024 and 40% by 2027. This is a significant step in the right direction.

What are the objectives of the non-profit organisation, We4She, which you launched in 2021?

The “We” is intended to be inclusive and concerns men as much as women. Our work is underpinned by four key action plans: sponsorship, lobbying, support and economic empowerment.

Your activity is particularly focused on the notion of sponsorship? Can you explain why?

To access top-tier jobs, high-flying women need networks of contacts. But these women have yet to learn how to build them and make them work. One reason why men still hold the most powerful jobs is because of these networks exist and the mutual help they provide. But the tendency is for women not to use them. Research conducted by the United Nations Industrial Development Organisation (UNIDO) in the Middle East and North Africa identified networks of contacts as a major factor behind a woman’s success in business. At both the WFC and We4She, we are all business leaders and know a great deal of people. We can open our address books for other women.

Tell me about the other three strategic action plans

We lobby businesses and policy-makers using the Gender Diversity Charter drawn up by the Women Working for Change initiative, which promotes gender diversity in hiring, equal pay, and the representation of women at management and board levels. We also support women in their personal development, with particular emphasis on awareness of cognitive bias and ingrained beliefs which undermine their careers in business. By providing women with economic empowerment, they become more emancipated and gain in self-confidence.

Despite the host of research demonstrating the advantages of gender diversity in the boardroom, and more broadly across all levels in a company, Africa’s private sector remains reticent on this issue. Can you explain why?

Pushing back the boundaries is a long drawn-out process. Many believed that the research you refer to would open up opportunities for women. But we have to face facts: nothing has changed! The only way to make up for lost time is to impose quotas. Such transformations take place over the long term and quotas are part of the solution. In France, the Copé-Zimmermann law produced the desired effect in the boardroom but not across the other levels in a company. Should quotas be imposed in all areas of business? At any rate, aside from a few exceptions across the continent, most companies have not budged on this issue.

Despite this, are some countries showing more promise than others?

There is a huge gap between the English-speaking and French-speaking countries. The English-speaking ones are far ahead. In Rwanda, South Africa and Namibia, there is a far higher ratio of women in the workforce. Conversely, French-speaking countries lag behind. In Africa, women can only rely on themselves. Proof of this lies in Africa’s position as global leader in female entrepreneurship. A quarter of working-age women in Africa have started a business! Under 10% of women in Africa earn a salary.

Over the last two years, in the world of finance, particularly in Nigeria, women have been appointed to run big financial institutions, such as Nneka Onyeali-Ikpe (Fidelity Bank), Halima Buba (SunTrustBank), Miriam Olusanya (GT Bank) and Yemisi Edun (First City Monument Bank)? Is there something special going on in this particular sector?

The Women in Financial Services 2020 Report points to only 6% of financial service company CEOs being women. Women are under-represented in this sector across the world and even fewer hold senior executive posts. However, there has been an upward trend since the early 2000s, with an increase in the ratio of female executive committee members in financial service firms. Africa can provide several examples of this, such as the Nigerian, Ngozi Okonjo-Iweala, the first woman appointed to head the WTO in 2020, and Nadia Fettah in Morocco in 2021, the first female Minister of the Economy and Finance. The IMF discovered that financial institutions with higher numbers of women executives tend to have more robust capital buffers, a lower ratio of bad debts and greater resilience to tensions. This provides a strong case for gender diversity.

Has the Covid 19 pandemic had an impact on male/female inequalities on the continent?

Yes. The Covid crisis has made inequalities worse. The vast majority of support went to companies in the formal sector whereas nearly 90% of African women work in the informal sector. Despite their great vulnerability, they have received little aid. The crisis has also made competition fiercer than ever with little by way of job vacancies.  Women have therefore become an adjustment variable, particularly in countries where the gender gap was already acute.  Yet, according to a survey conducted by the United Nations and published in the summer of 2021, not including women in vital decision-making jobs could jeopardise post-Covid recovery. Many have raised their voices in favour of an inclusive and sustainable recovery but not enough with regard to promoting women into jobs with high responsibilities.

Not being able to access financing presents a major barrier for women starting businesses. How can this be facilitated?

For a start, borrowing bank credit implies having a bank account. But according to the World Bank, only 37% of African women have an account compared to 48% of African men. We must therefore increase financial inclusion for women, which can happen through governmental policies and regulations. Different initiatives have already been launched, such as the Affirmative Finance Action for Women in Africa (AFAWA) by the African Development Bank, which aims to cover the estimated 42-billion-dollar financing shortfall, which affects women in Africa.  Another way to facilitate lending is through investment funds focused on women, such as the Janngo Fund, a Franco-Ivorian venture capital fund founded by the Senegalese woman, Fatoumata Ba. The fund is run by women and invests in start-ups that are either founded or co-founded by women or that benefit women. Lastly, banks and financial institutions can play a role by putting in place procedures which facilitate access for women, such as reducing guarantee requirements and introducing other more accessible forms of guarantee, as well as developing reliable products and services specifically for women which meet their particular needs.

Does your company have a gender diversity strategy?

At CFC, we adhere to a deliberate human resources policy. We constantly monitor the male/female ratio and have implemented measures specifically designed for women, such as flexible working hours for young mothers. Our CEO is wholly committed to gender diversity. Our company’s policy acts as a strong pull for retaining talent.

What type of a manager are you?

I am very close to my teams and advocate a style of management that is genuine and transparent. I sincerely believe that solutions can originate from all around and not always from the top. There are many dimensions to today’s crisis and it is not easy to gain a holistic perspective. I believe in team power and collective intelligence, which enable the emergence of a far greater capacity for innovation. Thanks to our work as a team, we have been able to transform many aspects of this crisis into opportunities.

What was a determining factor in your own personal experience that helps explain your success in the very masculine world of finance?

I’ve been lucky to work for CEOs for whom competence was paramount. Such commitment at the highest level makes a huge difference. But more importantly for me was the work I undertook on myself and the real progress I made on a personal level. You must be able to take your place with self-confidence, determination and assertiveness. That requires working hard on your inner stability, treading a path of self-development in order to surpass all the beliefs that hold us back.

How did you go about achieving this?

I have been practicing yoga and meditation for almost two hours every day for the last fifteen years. Meditation enables you to step back from situations in daily life. Also, I was coached at the start of my career. I was 27 years old at the time and worked alongside men who were over 40. Coaching was so helpful that I am now a coach myself.

Have you any tips to share with women working in very masculine professional environments?

First, avoid confrontation but remain aware of what you can achieve at your level. Admit to yourself that you are not always the one to make the decision but nevertheless ensure that you make your point of view heard with assertiveness. You must remain philosophical, hence the importance of self-development.