‘We have to show how a determined woman can succeed’ 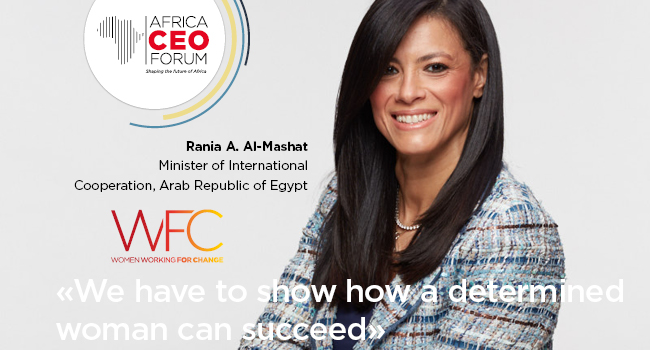 The current Minister of International Cooperation of the Republic of Egypt is a real UFO. The youngest minister in the country’s history, the economist who graduated from the International Monetary Fund (IMF) was also the first woman to hold the post of Minister of Tourism in 2018. She agreed to share with us her views on the state of gender equality on the continent.

What can be done to change mindsets about women’s participation in the institutional and corporate world?

The right attitude is to ignore gender altogether. A person, whether male or female, should be judged by his or her skills. Women really need to have this kind of outlook in the workplace. Over the course of my life, I’ve always sought to gain expertise and I never saw gender as an obstacle. What truly matters is what an individual expresses through their work. That’s what motivated me in the various positions I held at the IMF and the Central Bank of Egypt, and during my time as tourism minister. If I could only give women one word of advice, I would tell them to learn new skills, especially now that we’re going through a digital revolution.

What can be done at the institutional level?

There are many actions that need to be taken before true gender equality can be achieved. For example, when Christine Lagarde took over as managing director of the IMF, she sought to gather statistics on women’s economic participation in the institution’s member countries. She viewed this information as a critical macroeconomic factor in assessing public policy and thus something that should influence the support measures taken by the IMF. These data are essential.

How can young girls in Egypt realise their full potential during the health crisis?

According to statistics, our country is well-positioned on various fronts, including literacy. We also run programmes aimed at making science education accessible to young girls in rural areas. Today it’s clear that the coronavirus has triggered a crisis that underscores the gender imbalance in our society. It’s important for governments to be aware of this state of affairs. What’s more, Egypt has created a gender equality observatory that examines public policies related to gender issues and assesses their impact. The country’s highest office in the land – the presidency – is committed to progress in this area.

The African Continental Free Trade Area (AfCFTA) is a key issue for the continent. Do you think an adequate number of female politicians are participating in this integration process?

A person’s gender isn’t what matters. What does is what an individual has to contribute. Beyond Africa’s borders, some very large institutions are currently run by women, including the ECB and the EBRD. These examples make it less unusual for a woman to be at the helm of an organisation.

What would you like to say to the continent’s women leaders?

We have to create more ties with and draw closer to one another. We also have to show more often how a determined woman can succeed. As female leaders, we have to do our work and do it well; that’s how we’ll pave the way for others.