“Women have a more inclusive attitude than men” 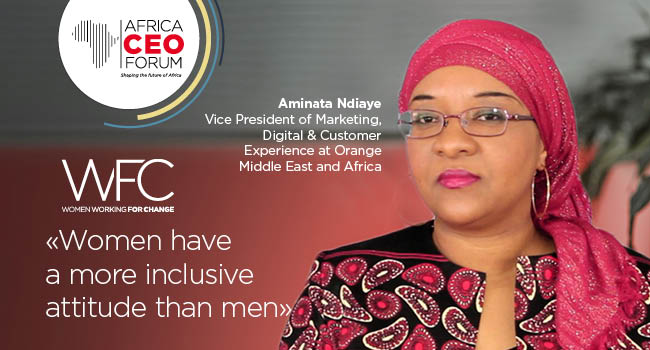 As Vice President of Marketing, Digital & Customer Experience for the French telecoms giant in 18 countries, Aminata Ndiaye’s portfolio spans almost 125 million customers, generating revenue of €5.2bn in 2018, and she oversees a team of some 50 people. Her hobby? Africa’s digital transformation, and it’s a goal she has made her life’s work. The brilliant alumna of École Polytechnique, now an essential part of Africa’s no. 3 telecoms player (after South Africa’s MTN and UK-based Vodafone), offers us a dazzling and enlightening view into her world.

Yes, very. I’m also happy to be able to bring my expertise to this continent that faces some significant challenges. Being able to be involved in Africa’s transformation, especially its digital revolution, has always been my main motivation.

According to Boston Consulting Group, if women and men participated equally in the global economy, global PDG could rise by up to 6%. What do you think is behind that?

That’s a remarkable figure. Women bring diversity and a different perspective. When companies face problems, getting more women involved in decision-making positions equips businesses with a range of solutions and alternatives that men wouldn’t necessarily have thought of. Ultimately, that gives companies more problem-solving possibilities. Several studies have shown that in the business world, companies that promote gender diversity, especially in their governance bodies, perform better than companies that don’t.

In your opinion, does women’s leadership exist?

I think women have a certain touch. . . women have a more inclusive attitude, are more open to others and are more focused on the value created and the collective and general interest.

Not really. Like every human being, we face challenges in both our personal life and career. Women definitely have to deal with specific challenges, such as reconciling the roles of business leader, mother and wife. I prefer to view this as a challenge rather than as an obstacle or a barrier. For example, in 2015, I was working at Sonatel in Senegal. I was in the early stages of my pregnancy and I was asked to revive Orange Money. I could’ve perceived taking on both challenges at once as a difficulty, but for me, it simply made 2015 a more hectic year than the others.

Do you see yourself as a role model for other women?

Up until a few years ago, I had never asked myself that question and I had a pretty negative view of the word “model”. I found it a little pretentious. After being invited to several forums to share my experience, I noticed that my influence could have a positive impact on a number of young women’s future. I also had the opportunity to attend a presentation of findings on the experiences of young people from underprivileged neighbourhoods. The finding that startled me the most was that for some of them, the absence of a role model was what held them back the most. That made me change my mind. Today, I go along with the game.

Are you outnumbered by men at your company’s management meetings and/or board of directors’ meetings? If so, how do you handle it?

I’m lucky to have been able to work in a gender-inclusive environment at Sonatel and to be able to continue to do so today at Orange. Women make up 40% of Orange’s board of directors in the DRC and it is chaired by a woman. I served on Sonatel’s board of directors, whose membership was also 40% female. Gender diversity is a reality at Orange because we’re convinced that it improves performance.

Is there a particular person who has inspired you in your work life?

I don’t think there’s just one person who has inspired me, but if I have to pick just one person, I’d say Nigerian-born Ngozi Okonjo-Iweala. Her career has been remarkable. She served as a minister twice and then became Managing Director of the World Bank. She has a very strong and authentic personality and I was lucky and honoured to hear her share her experience during a forum.

Outside the workplace, is there an African personality who inspires you in particular?

I’m going to say somebody who is often mentioned, but with good reason: Nelson Mandela. He was an extraordinary man and unbelievably resilient. He lived through the violence of one of the most barbaric regimes the world has ever seen. In spite of all the hardship, he maintained a sensitive spirit and never lost his humbleness. And, above all, he succeeded in reconciling an entire nation.

Which work (movie, TV series or CD) has impacted you the most and why?

Lion [movie by Garth Davis released in 2016]. This movie really tugged at my heartstrings. I love movies that evoke the human experience, resilience and various life trajectories. On top of that, without spoiling the story too much, the movie shows how important digital technology has become in our lives today!

I don’t have a routine, so it varies from day to day. I try to play sports regularly despite my busy schedule! I’m a big sports enthusiast: team sports, tennis, karate, track and field, etc. Today, I do a lot of walking, but my favourite activity after an intense day is to spend time with my loved ones.

I regularly participate in forums on women’s leadership. At Orange, I’m actively involved in the EVE programme, which aims to promote women’s access to leadership roles and male-dominated technical professions, as well as to establish pay equity and identify female talent. I’m also lucky to be able to mentor others through events like the Heroines Forum organised by Jeune Afrique Media Group.

In your opinion, can forums such as the Women in Business Meeting further the cause of African businesswomen?

Yes. Interacting with and helping one another makes women stronger, inspires us and can even propel some women’s careers forward. In addition, forums have the power to directly impact the African private sector and encourage certain relevant initiatives that help women. For all of these reasons, these platforms are true opportunity generators.

What kind of young woman were you when you were 20 years old?

I had just finished my two-year preparatory class programme (classes préparatoires) in maths sup and maths spé and began studying at École Polytechnique. I was happy to be done with prépa because it was so much work [she laughs]. It was like a breath of fresh air to enter a different world and be able to study something other than science. I was able to do track and field again and take painting classes. The only thing I was sure of back then was that I wanted to work in Africa, for Africa.

What was the most important step you took in your career?

In 2006, six months after starting a job at Accenture, I decided to resign and go work for one of Orange’s subsidiaries, Sonatel, in Senegal. That’s when I was able to make my most important dream come true, that of working in Africa.

Yes. I’m exactly where I wanted to be and where I truly thrive.