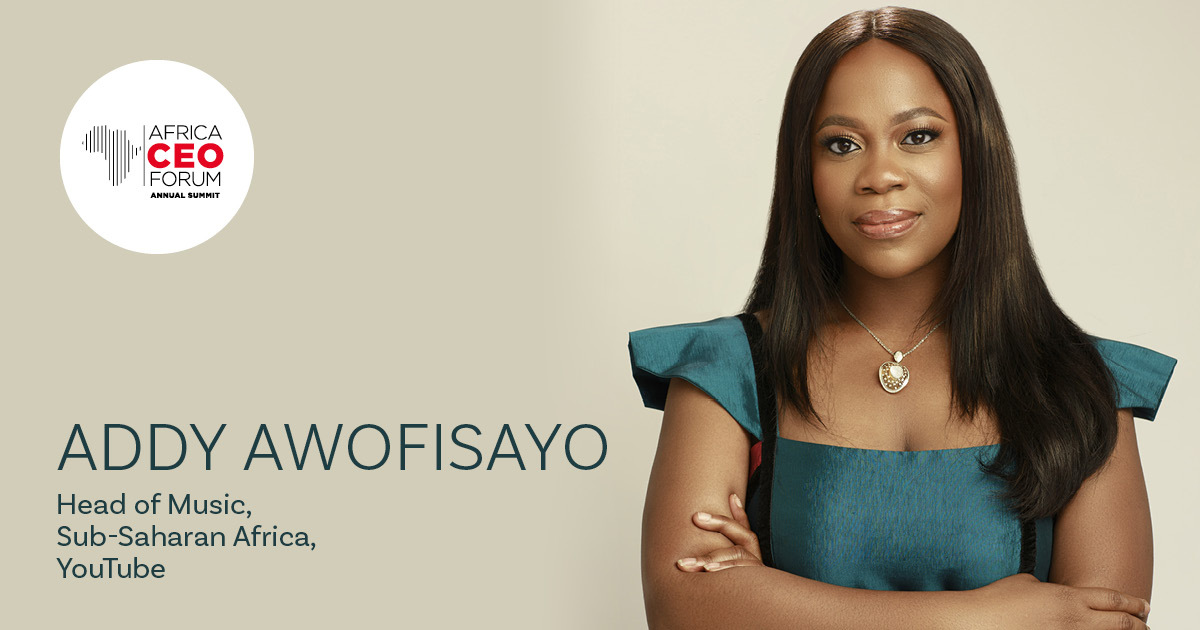 Addy Awofisayo is at the heart of a nascent but rapidly growing industry. Music streaming in Africa was a US$241m business in 2021 but is expected to grow at a CAGR of 13% to reach $484m by 2026, according to Statista. As Head of Music for Sub-Saharan Africa at YouTube and YouTube Music since September 2021, Addy Awofisayo reflects on the role of women in the African workplace. The Harvard and University of Virginia graduate joined YouTube following spells at Microsoft and American broadcaster CBS. Speaking to Women Working for Change (WFC) initiative, the Nigerian explains how young woman can break away from gender stereotypes and how the music industry can help female artists equal the visibility of their male counterparts.

Women Working for Change: Despite much research demonstrating the advantages of gender diversity in the boardroom, and across all levels of a company, Africa’s private sector remains reticent on this issue. Can you explain why?

Addy Awofisayo: I think most African cultures still have the cultural norms of men, in terms of power and position. In Africa, you see stories about men who don’t want to report to female managers because they feel that women are not supposed to be in the workplace. So that mentality in African cultures plays a role in the private sector. Do I think it is going to change? Maybe, not as rapidly as we want, but we see more women in power, more CEOs and presidents. Maybe Africa has the highest rate of women presidents among other continents. It is changing, especially with the new generation. The new generation is more exposed to the media and have a different mentality about gender. With the older generation, maybe there is still this gender agenda. Even with age, some people consider that you have to reach a certain age to be a leader.

Do you see changes in Nigeria on this issue of gender?

Yes, there is change in Nigeria but slowly. Not as fast as we want to see it. We are starting to celebrate more women in power. Young women know that you can be in power. For example, Guaranty Trust Bank (GT Bank) has just got its first female CEO with Miriam Olusanya in July 2021. It is one of the biggest banks in Nigeria and in Africa. In the banking industry, Miriam Olusanya was not an isolated case. The last few months, seven women have been nominated CEO in Nigerian banks. All those banks have been here for 25-30 years and they have just had their first female CEO. I think we will see more women CEOs in sectors like FMCG, education and hospitality.

Has the COVID-19 pandemic had an impact on male/female inequalities on the continent?

Children were at home and females play the role of the caretaker at home. Every household was at home and it was putting more pressure on females with kids. I think the pandemic showed us more the inequality in gender. It was very tough for a lot of females.

In the creative industry, what is the situation?

I think that industry is one that women are striving for on the continent. When you look at the film industry, there are female directors, like Kemi Adetiba in Nigeria, director of King of Boys, or Nosipho Dumisa from South Africa who produces Blood and Water on Netflix. We are seeing more females in the creative industry. It is happening on YouTube. We are breaking the barriers faster than other industries. Again, even if there is still disparity between men and women, the more females we have in power, directors, or executive producers, then we will be able to close that gap. As a female, we have to work twice as hard if we want our work to be seen.

What about in the music sector?

In the music space on the continent, the number of women is rising. People are listening to more women, especially young ones like Tems from Nigeria. At YouTube, we are making sure that we are supporting them. The music space in Africa is still predominantly male, in terms of the biggest artist on the continent. If I ask someone to name five artists from the continent, all five will mostly be male. We need to do more to support female artists and make sure people will discover their music.

What could be the strategy to boost women’s visibility?

We are supporting a programme launched by an organisation called Bright’s One. They give opportunities to Nigeria’s female songwriters and producers. They have a programme to support 10 females with mentoring, training, and even grants to create their own project. YouTube announced it was supporting this programme last November. We need to see more initiatives targeted to empowering and training women in the industry.

What type of manager are you?

I would say I am a very challenging manager. I had a manager who was challenging me to be the best version of myself. He was one of my best managers. I want to be a manager who supports and also challenges, regardless of whether you are a male or female. I was very lucky to have great managers who supported me. I also had strong female models and my mother. From her and even my father, I got the philosophy that I can do it. As long as you put your mind to it, you can do it. When I start doubting if I can do something, I always remind myself of that. Sometimes, you have to put yourself in that challenging situation for the confidence to come.

Do you play a role of sponsor to young women?

I do, but not as much as I possibly should. The one person who made me start actively was my niece who is 18 and is going to college. I know how much my mother and some of the female figures I have in my life influence me. I want to be like that for my niece and young women around me. That’s why it is so important for us to celebrate women who are in power. When we do that, we show the younger people that they can also do it.

Do you any tips to share with women working in very masculine professional environments?