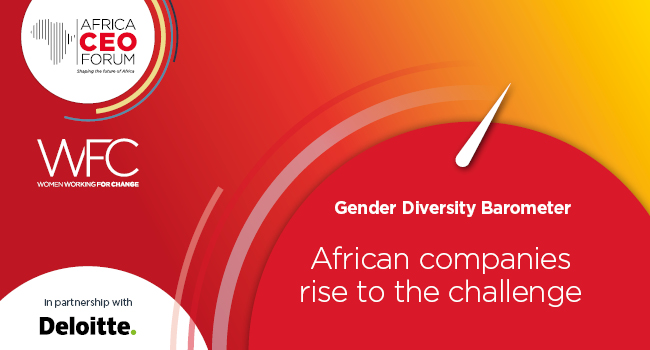 In partnership with the Women Working for Change (WFC) network, an initiative of the Africa CEO Forum, Deloitte has published a report on African companies’ progress in terms of gender parity. The survey shines a light on the range of initiatives companies have implemented to adhere to the gender diversity and pay equity guidelines laid down in WFC’s road map, known as the Gender Diversity Charter. Based on the results of the survey, Africa’s corporate world is still a long way from achieving gender parity.

Encouragingly, 64% of the companies surveyed reported a nearly 50:50 male/female applicant ratio between 2019 and 2020, attesting to a gender-balanced applicant pool. The survey reveals, however, that after the recruitment process, the trend reverses, as companies do not reach this level of gender parity in their workforce. More than three-fourths of businesses recruit mostly men, while 30% have a majority female staff.

As a result, there is a lack of gender diversity at the leadership level. At a majority of the companies surveyed, women are underrepresented in executive positions. This trend is less marked at the management level, where two in five companies have a balanced number of male and female managers, and only 3% of the nearly 500 companies surveyed reported having no women managers in their workforce.

Corporate boardrooms have the most glaring gender gap, as just 25% of the companies surveyed have a gender-balanced board of directors, while 17% do not have a single woman on their board.

Differentiated compensation policies are the last barrier to equality

The report’s findings on this point are encouraging, as close to 70% of the companies surveyed do not have a differentiated compensation policy based on gender and nearly a quarter of businesses have taken steps to institute pay equity.

In light of these figures, survey respondents are taking action

Deloitte’s survey also examines the initiatives companies have implemented to remedy the lack of diversity in hiring and the gender pay gap. Its findings show that these efforts are wide ranging, while some are more binding than others. Affirmative action and quotas are suggested as possible avenues for promoting gender diversity in executive positions and recruitment, in addition to training and clear guidelines about the importance of fostering an inclusive workplace. The establishment of committees and groups focused on showcasing women’s leadership is another popular idea. Finally, since transparency is key, audits need to be undertaken regularly to improve the implementation of the 4 key principles of the Gender Diversity Charter: Gender-diverse recruitment, Equal pay, Gender diverse management and executive committees and Gender balanced boards.

We invite you to delve into the findings of the full report by following the link in this article.